One Sentence Summary:  The Phillies missed out on their first winning season since 2011, dropping the 2019 season finale by a 4-3 score to the last place Marlins.

What It Means:  Was this manager Gabe Kapler's final Phillies game at the helm?

What Happened:  With Maikel Franco representing the tying run on second base in the bottom of the ninth, Andrew Knapp struck out swinging on a ball out of the zone to end the game and the Phillies extremely disappointing season.  Bryce Harper and Adam Haseley had a pair of hits.  The offense went 0 for 8 with runners in scoring position, leaving 13 men on base.  A bullpen game from the start, the Marlins jumped on starting pitcher Blake Parker for three runs early. 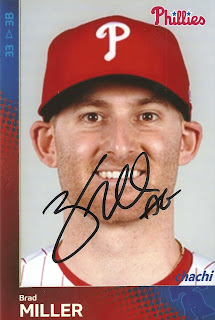 Featured Card:  Brad Miller hit two more home runs (13) and went 4 for 5 overall with three RBIs.  Matt Breen Tweeted Miller is the first player in Phillies history with three multi-home run games in a nine-game span and Corey Seidman added Miller's 12 home runs and 16 extra-base hits were both the most by any Phillies player ever with 130 or fewer plate appearances in a  season.

Field Report:  My family arrived to the ballpark early, as we've now made it a tradition to attend the final game of the year and enjoy Fan Appreciation Day.  While Jenna, Ben and I decided to eat first (Jenna and Ben at Pass and Stow and me at Bull's BBQ), Doug took off as soon as the gates opened for a prime spot down the first base line to hopefully add a few last autographs to his collection.  Fellow collector Rick kept him company and both were featured in the Phillies' Instagram story of the day.

Doug added autographs from Miller, Jared Eickhoff, Zach Eflin and Scott Kingery and Rick passed along a Phil Gosselin Chachi Photo Card he had signed for us.  Doug was bummed Bryce Harper didn't make his way over to the waiting crowd to sign any autographs.  In between eating his pizza, Ben and I got pictures with Jared Hughes and Edgar Garcia, and we caught part of the broadcast team - Larry Andersen, Scott Franzke, Ben Davis and Gregg Murphy as they were leaving the Diamond Club entrance lobby.

Once at our seats, we noticed Aaron Nola talking to a small group of people and the ace of the staff posed for a quick picture with Ben.  We didn't come away with any prizes or other souvenirs, but we had a great day and we're already anxious for Opening Day 2020. 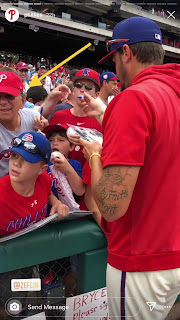 Memory Lane - Game 162
This is my 11th season of posting on this blog and I truly enjoy and appreciate the outlet this has provided for me to share my love of baseball, baseball cards and (occasionally) the Phillies.  Unlike some of the Phillies current coaching staff, I'll be back in 2020 and I sincerely thank you for following along, commenting and sharing your Phillies stories.

October 4, 2009 - Catcher Paul Hoover singled in the winning run in the 10th in a 7-6 win over the Marlins.
October 3, 2010 - The Phillies lost 8-7 to the Braves in their final tune-up before facing the Reds in the NLDS.
September 28, 2011 - The Phillies closed out the 2011 regular season with a 13-inning victory against the Braves, setting a franchise record with their 102nd regular season win.
October 3, 2012 - The Phillies closed out their 2012 season with a lethargic 5-1 loss to the N.L. East Champion Nationals.
September 29, 2013 - Zach Miner got the ball for the Phillies and lasted 2 1/3 innings in a 12-5 loss to the Braves.
September 28, 2014 - Cole Hamels pitched another fine game and suffered through another outing with minimal run support.
October 4, 2015 - Phillies avoid 100 losses and Ichiro makes his pitching debut in a 7-2 victory.
October 2, 2016 - Phillies bid an emotional farewell to franchise icon Ryan Howard.
October 1, 2017 - Phils clobber Mets in Pete Mackanin's final game as manager.
September 30, 2018 - Lame duck Phillies win season finale in Gabe Kapler's frustrating debut season.
September 29, 2019 - Phillies miss postseason for 8th year in a row, Brad Miller finishes the season red hot.

Want to revisit every game of the 2019 season?  My handy game summary index can be found here.

Here's to the end of disappointing seasons!

See you next October.

Thanks for all the enjoyable writing, Jim. Your blog made the Phillies' 2019 season a good amount more bearable. Here's to a better 2020!