One Sentence Summary:  The Phillies ended the 2018 season with a 3-1 win as they head into what will hopefully be a very active offseason.

What It Means:  The Phillies finished the season two games below .500, a 14-game improvement over their 2017 season.

What Happened:  Cesar Hernandez hit a lead-off home run (15) while Carlos Santana and Rhys Hoskins also drove in a pair of runs.  Ranger Suarez started (3 innings, 1 run) but it was Tommy Hunter who secured the win after 1 1/3 scoreless innings.  Seranthony Dominguez recorded his 16th save of the season. 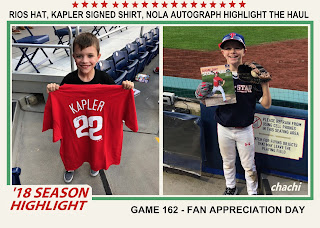 Featured Cards/Field Report:  Jenna and Ben arrived before the game and were disappointed to discover no Phillies players greeting the fans as they entered the gates.  They circled the park, walking to each gate to confirm.  Doug and I arrived in the 3rd inning following his early afternoon baseball game.  It was also good to spend some time with Jenna's brother, the boys' Uncle Drew, during the game.  We posed for one last picture with the Phanatic and former Phillies pitcher Larry Christenson was seated a few rows in front of us and he gladly signed Doug's baseball.

Postgame, Ben secured a t-shirt shot from the Phanatic's t-shirt cannon and we were surprised to discover the shirt had been signed by Phillies manager Gabe Kapler.  Doug stationed himself by the corner of the Phillies dugout, catching the game-used hat tossed by reliever Yacksel Rios.  He also caught a batting glove and a baseball tossed by one of the batboys.  Finally, Aaron Nola stopped by and made sure to honor every last autograph request from the small crowd of fans now gathered behind Doug.  As disappointing as the finish to the season was, I'm still bummed that Phillies baseball is over until February.

Memory Lane - Game 162
This is my 10th season (!) of posting on this blog and I truly enjoy and appreciate the outlet this has provided for me to share my love of baseball, baseball cards and (occasionally) the Phillies.  I'll be back in 2019 and I sincerely thank you for following along, commenting and sharing your Phillies stories.

October 4, 2009 - Catcher Paul Hoover singled in the winning run in the 10th in a 7-6 win over the Marlins.
October 3, 2010 - The Phillies lost 8-7 to the Braves in their final tune-up before facing the Reds in the N.L.D.S.
September 28, 2011 - The Phillies closed out the 2011 regular season with a 13-inning victory against the Braves, setting a franchise record with their 102nd regular season win.
October 3, 2012 - The Phillies closed out their 2012 season with a lethargic 5-1 loss to the N.L. East Champion Nationals.
September 29, 2013 - Zach Miner got the ball for the Phillies and lasted 2 1/3 innings in a 12-5 loss to the Braves.
September 28, 2014 - Cole Hamels pitched another fine game and suffered through another outing with minimal run support.
October 4, 2015 - Phillies avoid 100 losses and Ichiro makes his pitching debut in a 7-2 victory.
October 2, 2016 - Phillies bid an emotional farewell to franchise icon Ryan Howard.
October 1, 2017 - Phils clobber Mets in Pete Mackanin's final game as manager.
September 30, 2018 - Lame duck Phillies win season finale in Gabe Kapler's frustrating debut season.

Want to revisit every game of the 2018 season?  My handy game summary index can be found here.
Posted by Jim at 7:00 AM