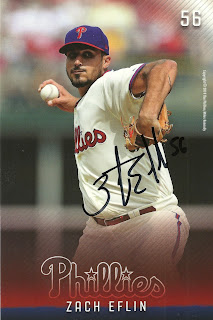 One Sentence Summary:  Zach Eflin closed out his season with a terrific start and the offense showed signs of life in this 9-3 win.

What Happened:  Eflin went 7 2/3 innings and exited the game after allowing a two-run home run to Neil Walker.  Before that, he had allowed a run on five hits while striking out six.  Bryce Harper hit a three-run home run in the sixth, his 35th of the year.  Cesar Hernandez (14) and Maikel Franco (17) also homered.  Adam Haseley had three hits and a pair of RBIs, and Deivy Grullon collected his first big league hit - an RBI double in the third.

Featured Card:  I'm hoping Eflin can find more consistency in 2020, as he's nearly unhittable when he's got his good stuff working for him.  He signed this photo card for me at this season's ALS Phestival.

Transactions:  In need of a fresh arm, Enyel De Los Santos was recalled and joined the bullpen, giving the Phillies 36 players on their active roster.  De Los Santos had been keeping warm down in Clearwater.
Posted by Jim at 3:00 PM

Email ThisBlogThis!Share to TwitterShare to FacebookShare to Pinterest
Labels: 2019, Eflin

What relief you must feel, not having to put lipstick on this pig every day now. :)