One Sentence Summary:  The Phillies outlasted the Marlins, winning 5-4 in 15 innings on a walk-off ground ball from Adam Haseley booted by shortstop Miguel Rojas to allow the winning run to score.

What It Means:  The Phillies need to win their final two games of the season to finish with a winning record for the first time since 2011.

Featured Card:  Cole Irvin and Ranger Suarez combined for six innings of scoreless relief, with Suarez ultimately picking up the win.  Irvin earned a Topps Now card following his strong outing in his big league debut back on Mother's Day.  Since his September call-up, Irvin has appeared in eight games and he owns a 0.73 ERA.  In 12 1/3 innings this month, he's struck out seven and allowed only one earned run.

Field Report:  And we were there!  Granted, we didn't make it through all 15 innings, but we still lasted fairly late into the night.  Ben and I arrived early and enjoyed the views from our seats in the Diamond Club with a few hundred other loyal fans.  Doug and Jenna arrived following Doug's baseball practice.  It was a gorgeous night for baseball, and our final night game until the 2020 season. 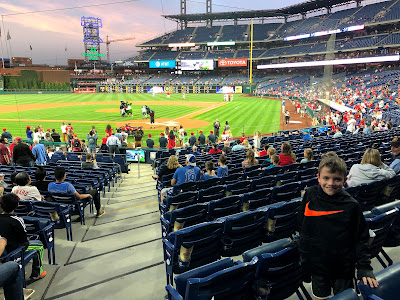 Email ThisBlogThis!Share to TwitterShare to FacebookShare to Pinterest
Labels: 2019, Irvin