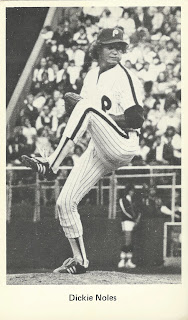 One Sentence Summary:  The late season swoon continued for the Phillies, as they lost their final road game of the year, 6-3, and the Nationals completed the five-game series sweep.

What It Means:  After a weekend series at home against the last place Marlins, the Phillies head into the 2019-2020 offseason with a lot of questions and lingering disappointment.

What Happened:  Stephen Strasburg struck out 10 Phillies in his six innings of work.  All Phillies runs came from long balls - Cesar Hernandez (13) with a solo shot in the fourth and Andrew Knapp (2) with a two-run home run in the eighth.  Jason Vargas closed out his season by getting chased in the fifth inning, having allowed five runs on six hits and three walks.

Featured Card:  Todd Zolecki Tweeted the last time the Phillies were swept in a five-game series was back in August 1979 against the Pirates.  Dickie Noles took the loss for the Phillies in the final game of that series sweep on August 5, 1979.
Posted by Jim at 9:30 PM

Email ThisBlogThis!Share to TwitterShare to FacebookShare to Pinterest
Labels: 1980, Noles

Dickie Noles was once traded for himself:

September 22, 1987: Loaned to the Detroit Tigers by the Chicago Cubs.

October 23, 1987: Returned to the Chicago Cubs by the Detroit Tigers as part of earlier loan.


(The above is from Baseball-Reference.com, who seems to have cleaned this transaction up. At the time, he was traded for a player to be named later, which turned out to be him.)