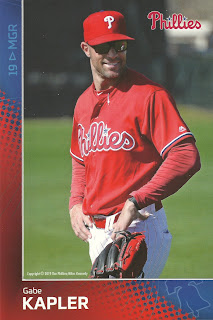 On Thursday morning, 11 days after the end of the regular season, Gabe Kapler was relieved of his duties as manager of the Phillies.  Kapler managed for two seasons, failing to make the postseason both years, and compiling a record of 161-163.  He lasted slightly longer than Ryne Sandberg (278 games from 2013 to 2015) but not quite as long as Nick Leyva (338 games from 1989 to 1991).  By most accounts popular with the players, Kapler never quite gelled with the Philadelphia fanbase and ultimately his lack of winning and two straight seasons of brutal September finishes were his downfalls.

The Phillies could now turn to a more experienced manager with Buck Showalter, Joe Girardi, Joe Maddon and John Farrell being mentioned as potential candidates.  Other names out there are Dusty Baker and Mike Scioscia, or the Phillies could go with someone already in the system such as third base coach Dusty Wathan, bench coach Rob Thomson or the team's current player
information coordinator, Sam Fuld.  If I had to guess, I'd say either Showalter or Maddon is managing the team when pitchers and catchers report in mid-February.

Wathan, Thomson and five other Phillies coaches were all offered contracts for the 2020 season and the choice is theirs as to whether or not they return.  Pitching coach Chris Young was dismissed after one season in that position, making him the first pitching coach to last just one season . . . since Rick Kranitz the season before him.  (Jim Wright was an interim pitching coach in 1996 filling in for an ill Johnny Podres.)  Interim hitting coach Charlie Manuel returned to his senior advisor position in the front office, meaning the Phillies have to fill the roles of manager, pitching coach and hitting coach this offseason.  Hopefully the positions are filled soon so that the new skipper can help recruit free agents Anthony Rendon and Gerrit Cole.

The coaches have already been offered contracts? Doesn't the new manager have a say in his own staff?

Same old BS organization! Why is the owner the one firing the hitting and pitching coaches? Isn't that a GM task? And speaking of the GM, why is he still here? He did nothing to improve this team during the season. He did not shore up the pitching staff or bench at the start of the season. Middleton spent "stupid money" on Harper, Realmuto, Segura, and McCutcheon, but it was all wasted because no one in this clueless organization apparently heard of "pitching is 75% of the game". And what of McPhail? What has he done all year except to lower expectations? Why hasn't he been fired? With Middleton making all the moves anyway, a president is useless, especially a phantom like McPhail.

Now they are going to waste yet another year, to give McPhail and Klentak an undeserved 2nd chance. Also, taking the easy route and hiring Wathan or Thompson is just keeping more of the same-old that has plagued this team since 2010.