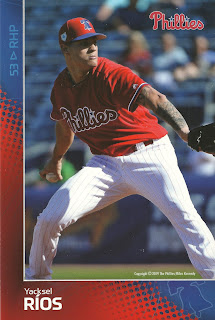 One Sentence Summary:  Five Diamondbacks pitchers I've never heard of before held the Phillies to five hits in this latest lifeless loss.

What It Means:  We didn't even stay up to watch the beginning of this game.

Featured Card:  I got nothing for this game, and since I never provided Yacksel Rios with the usual Phillies Room send-off after he was claimed off waivers by the Pirates on August 3rd - here he is.  Fare thee well Yacksel, and thanks for throwing your hat to my son on the final day of the 2018 season.  His final Phillies cards can be found in the first edition of the team-issued photo card set and in the 2019 Lehigh Valley IronPigs team set.

Email ThisBlogThis!Share to TwitterShare to FacebookShare to Pinterest
Labels: 2019, Rios