After 79 Years, Larry File Gets a Phillies Baseball Card 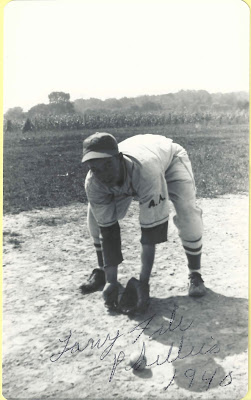 Fellow collector Alan was kind enough to e-mail me a few weeks ago to let me know he had 1970 Grant Jackson Phillies Photocard I needed from my want list.  He graciously told me he'd send me the Jackson card along with a "small care package," including a couple of odds and ends.

In the package along with the Jackson photo card were signed photo cards of Jerry Martin, Larry Christenson and Juan Samuel and a signed Manny Trillo card from the 1981 Topps 5 x 7 set.  There were five other non-Phillies photo card autographs, shown here, of former Phillies pitchers Curt Simmons, Jack Sanford and Ron Reed.  The Reed photo is interesting to me as it appears to be the same photo used for his 1982 Topps card.  These are all welcome additions to my Phillies collection. 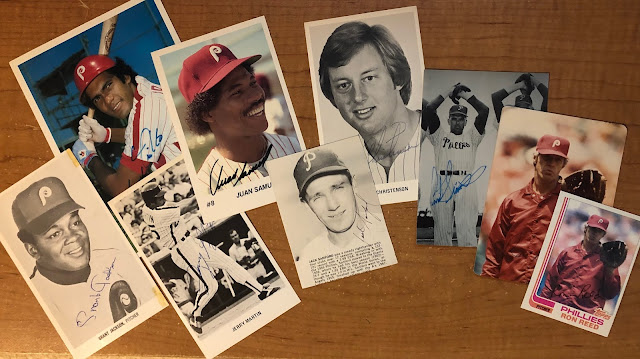 The final autographed photo really caught my attention, as I had never heard of Larry File and the inscription under his autograph said, "Phillie 1940."  I came up empty when Googling Larry File, but thanks to Baseball Reference and a quick review of the 1940 Phillies roster, I found a Sam File.  Sam File's full name is Samuel Lawrence File, so I had my match.

Unfortunately, I didn't learn much more about File than what's on his Baseball Reference page.  At 18 years old, he was the youngest player in the National League in 1940, making his debut on September 6th.  He appeared in seven games for the Phillies, collecting a hit in 13 at-bats (.077).  He split his 33 innings in the field between shortstop (28 innings) and third base (5 innings) committing three errors in 20 total chances.  He remained in the Phillies minor league system in 1941 (77 games), 1942 (113 games) and then again in 1946 (20 games), playing his final year of professional baseball that season at the age of 24.  His three season interruption was due to his military service with the Coast Guard during World War II.

Nice card--hopefully one of Larry (Sam) File's descendants comes across his Chachi card and enjoys it!

He is my grandfather!!! I absolutely love this! How can I get a duplicate made? Or several for other family members? If you could please contact me jcbarlow4@gmail.com I would really appreciate it. Thank you so much for this! I happened to come across it at a time I really needed it!

This is my Daddy, we couldn't have find at a better time, He would have been 98 today. Agree with my niece Jacqueline, we'd like to obtain copies of the card.

Larry is my father. We would love to have copies of his card for us & his grandchildren.

Wow just at a time when I really needed a sign here it is!! Larry was my grandfather... I often find my self telling people how my grandfather played for the phillys and how baseball/softball runs through Our families are veins. Most people never heard of him for he only played for a short period of time but to show people this card would mean the world to me and my family #GoneButNeverForgotten #LongLiveNumber6

Hi everyone! I just sent an e-mail to Jacqueline and I'd be happy to mail the original autographed photo to the family. It belongs with your family and not in my collection. The card I made is a virtual card only and I don't actually print these out. With that being said, any photo service should be able to print copies of the card and I e-mailed the original high resolution file to Jacqueline as well.