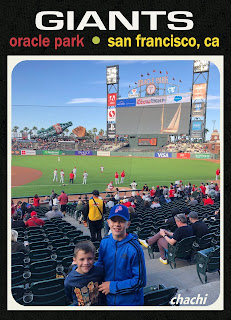 One Sentence Summary:  Madison Bumgarner and two Giants relievers shut down the Phillies offense in this 5-0 loss.

What It Means:  Bumgarner dominated a flailing Phillies offense, allowing only one hit (to pinch-hitter Cesar Hernandez) in his seven innings of work.

What Happened:  Aaron Nola was cruising until the third when he allowed four straight hits, including a single to Bumgarner, giving the Giants a 3-0 lead.  Nick Pivetta allowed two more runs, including a home run to Mike Yastrzemski, in his three innings of work.

Featured Card/Field Report:  We made the trip to San Francisco for this series, and despite the outcome on the field we had a blast in our first visit to the city.  Arriving late Thursday morning, we rested in our hotel room and then were ready when the Willie Mays gate opened two hours before gametime.  As expected, we loved the ballpark, the beyond friendly staff and the garlic fries.  We had a wonderful view of Bumgarner's performance sitting behind the Phillies dugout in Section 106.

Transactions:  In a questionable (and short-term) move, Adam Haseley was optioned to Lehigh Valley when Jay Bruce was activated from the injured list.
Posted by Jim at 12:00 PM

Awesome stadium! I lived in the Bay Area for years and loved going there. Did the boys slide down the Coke bottle in the outfield? My daughter still talks about doing that at age 3--her only memory of the park.

Yep, they went down the slide at least 5 or 6 times before the line got too long!