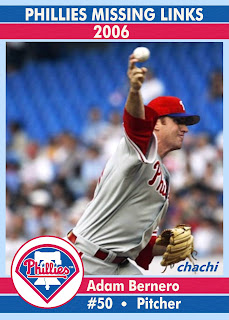 Released by the Royals on June 2nd, the Phillies plucked Adam Bernero from the waiver wires on June 8th and he made his only start with the team on June 30th.  It didn't go well (see below).  Bernero was designated for assignment on July 4th, released on July 13th and re-signed by the Royals on July 14th, his entire Phillies career lasting less than six weeks and resulting in an ERA of 36.00.

Bernero's emergency start was necessitated when Brett Myers was placed on the temporary inactive list following Myers' late night arrest in Boston on June 23rd for striking his wife outside a bar.  Myers pitched on June 24th in Boston, but was on the inactive list when his next scheduled start came around prompting Bernero's recall from the Scranton/Wilkes-Barre Red Barons.  Only 5 1/2 games behind the first place Mets when the month of June began, the Bernero game ended the month with the Phillies now 11 games back.  They'd finish the season just 3 games back in the N.L. Wild Card standings.

Bernero appeared in three games for the Royals later that summer, took the 2007 season off and attempted a comeback with the Pirates' AAA team in 2008 before calling it a career.

0 Bernero Baseball Cards in My Collection