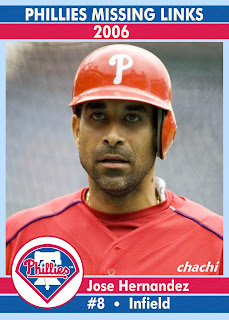 An All-Star with the Brewers in 2002, Jose Hernandez ended his 15-year Major League playing career with 18 games for the contending 2006 Phillies.  Hernandez was one of a trio of veterans acquired in August along with Jamie Moyer and Jeff Conine to help the Phillies attempt a run on the N.L. Wild Card.  The team had purged the clubhouse of veteran leadership (and hefty salaries) in July with the departures of Bobby Abreu, Cory Lidle, David Bell, Sal Fasano, Rheal Cormier and Ryan Franklin.  With the youngsters now leading the way, suddenly the Phillies were in contention again.

12 of his 18 games with the Phillies saw him used as either a pinch-hitter or a pinch-runner, although he did receive four starts at third base and a start in right field.  His biggest hit with the club was a grand slam on September 18th off the Cubs' Sean Marshall in a game the Phillies would eventually lose 11-6.  Hernandez departed following the season, signing with the Pirates.  He'd spend the entire 2007 season playing for Triple-A Indianapolis before playing two final professional seasons in Mexico in 2008 and 2009.