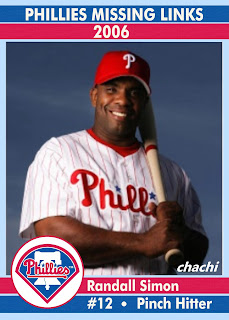 Three years after the "Sausage race incident," Randall Simon found himself with the Phillies, contending for the N.L. Wild Card and serving in a pure pinch-hitting role.  The experiment didn't really work as Simon went just 5 for 21 (.238) with no extra base hits and only two RBIs.  In 2007, the Phillies invited him to spring training as a non-roster invitee, but he didn't make the team and his Major League baseball career ended.

Simon's best season came in 2002 with the Tigers when he hit .301 with 19 home runs and 82 RBIs.  His production dropped every year afterwards as he bounced from the Pirates to the Cubs, back to the Pirates, briefly with the Devil Rays and Rangers and then finishing with the Phillies.  Only 31 in 2006, Simon played in parts of four more seasons (through 2010) in Mexico and with various independent teams.

The photo I had to use for his 2016 Chachi card features Simon playing for the Netherlands in the 2006 World Baseball Classic.

Phillies Career
23 games, .238 (5 for 21) with 2 RBIs and 2 walks
Acquired:  September 1, 2006 - Purchased from the Texas Rangers.
Debut:  September 2, 2006 - Pinch-hit for Jon Lieber in the 8th inning against the Braves, singling off Tyler Yates.  Simon was replaced with pinch-runner Joe Thurston.
Final Game:  September 30, 2006 - Pinch-hit for Geoff Geary in the 9th inning against the Marlins, striking out against Joe Borowski.
Departed:  Spring Training 2007 - Released.

0 Simon Baseball Cards in My Collection

Just a curiosity, but I have noticed that the listed weights for some of these recent entries are only valid for very early in their careers. Simon looks to be at least 200 for most of his career. Topps, if that is the source, often listed the same weight for a player for many years, even when it was clear the number was outdated.

Phungo - This was a very cool coincidence!

WileyBB - My source is Baseball Reference, which most likely takes weight/height from the beginning of the player's career.