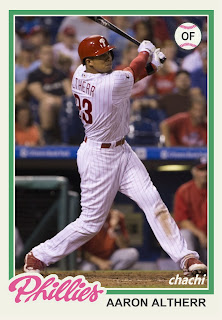 *Technically, Altherr first had a card issued in the style of the 2015 Phillies Team Issue 2 set, which we first learned about thanks to a tip from fellow collector Steve F.  I'm still trying to track down this card for my collection.

First Mention on The Phillies Room:  November 24, 2013 - The Phillies recently crossed another offseason milestone off their list by adding four players to the 40-man roster in advance of December's Rule 5 draft.  I've tracked these additions over the past four seasons below and the percentage of players added to the 40-man roster in November to eventually play with the big club is a so-so 44% (7 for 16).  Hopefully that percentage goes up this year . . .

Aaron Altherr (of) - The speedy outfielder was drafted in 2009 by the Phillies and he spent last season with the High-A Clearwater Threshers.  He batted .275 and led the Florida State League with 36 doubles.  Along with several cards from minor league team sets, I have Altherr's cards from the 2011 Bowman Chrome Prospects and 2011 Topps Pro Debut sets in my collection.