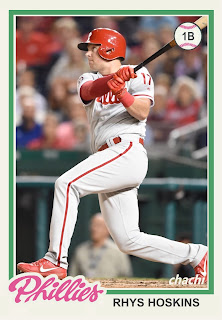 First Mention on The Phillies Room:  April 3, 2016 - Phillies 6, Phillies Futures 5 . . . Darin Ruf capped his fantastic spring with a pair of hits and three RBIs, and it was his double in the bottom of the ninth that tied up the ballgame.  Nick Williams and Rhys Hoskins homered for the Phillies Futures team.  Dylan Cozens had the defensive play of the game, firing a cannon from right field to nail Freddy Galvis in a play at the plate.