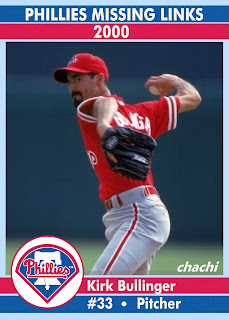 The younger brother of fellow pitcher Jim Bullinger, Kirk Bullinger came to Phillies Spring Training camp in 2000 as a non-roster invitee and made the team's opening day roster.  He appeared in three games in relief for the Phillies before landing on the disabled list on April 11th with a lower back strain.  Once healthy, the team activated him and optioned him down to Triple-A Scranton/Wilkes-Barre where he'd pitch the rest of the season.  While still on the disabled list, his uniform number was unceremoniously relinquished to a young slugger named Pat Burrell who made his big league debut that May 24th.  (Burrell would switch to #5 to start the 2001 season.)

0 Bullinger Baseball Cards in My Collection
-