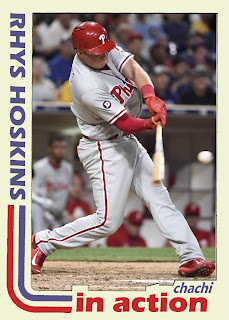 What It Means:  Hoskins is the first Phillies player to hit the first two home runs of his career in the same game since Scott Rolen did it on August 21, 1996.

What Happened:  Odubel Herrera extended his hitting streak to a career-best 17 games.  Ricardo Pinto allowed most of the damage, giving up five Padres runs on four hits in his two innings of relief.

Featured Card:  Hoskins gets the In Action treatment to celebrate his first (of hopefully many) Major League home runs.
Posted by Jim at 9:00 PM