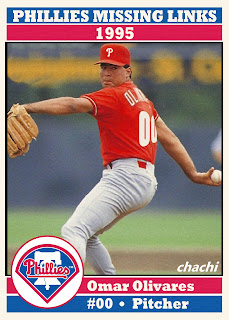 Omar Olivares pitched for eight teams during his 12-year career, but the team for which he had the shortest tenure was the Phillies.  The 1995 Phillies were a team in desperate need of pitching help, and they claimed Olivares off waivers from the Rockies on July 11th.  He appeared in just five games with the club before being outrighted to Scranton/Wilkes-Barre where he appeared in seven games for the Red Barons.  The Phillies released him following the season.

A lifetime .240 hitter, his biggest moment with the Phillies came in his final appearance with the club on July 24th when he pinch-hit for Tyler Green in the bottom of the fifth inning against his former Rockies teammates.  Olivares crushed a two-run, pinch-hit home run off Bryan Rekar in a game the Phillies would ultimately lose, 11-3.  His pitching line that day outweighed his offensive skills, as he allowed three runs on four hits in four innings of mop up duty.

Olivares became the first player in franchise history to wear #00.  Al Oliver had worn #0 in 1984 and Rich White would become the second player to wear #00 in 2006.