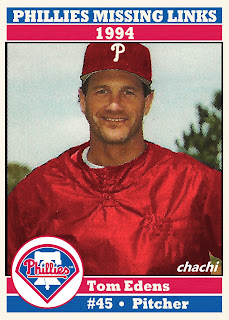 Tom Edens may have had a chance at appearing on a Phillies baseball card if not for the player's strike that prematurely ended the 1994 season.  Acquired from the Astros on July 31, 1994 in exchange for Milt Thompson, Edens appeared in just three games for the Phillies before the team played its last pre-strike game on August 11th.

On that day, the Phillies walked-off with a 2-1 win over the Mets when Ricky Jordan singled home Billy Hatcher with the winning run.  Edens had pitched two scoreless innings in the 14th and 15th, earning the win and becoming the answer to the following trivia question:  Who was the last Phillies pitcher to take the mound prior to the 1994 player's strike?

Another bit of Phillies trivia involving Edens is that he was the player to be named later received from the Mets in the July 1989 Lenny Dykstra-Juan Samuel trade.