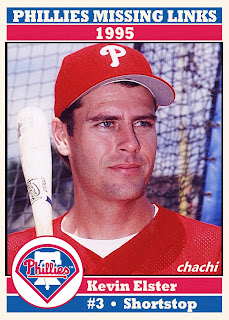 Having never before actually seen proof of Kevin Elster as a member of the 1995 Phillies team, the photo used for this custom card was the motivation behind creating an entire set of Phillies Missing Links cards.  I don't remember the specifics as to how I found this photo on the internet, but when I found it I immediately thought it was begging for a Phillies card.  I didn't want to go through the trouble of creating a 1995 Topps template, so I created the original baseball card design used here. Not wanting to stop at just Elster, I decided to use this design to give a Phillies baseball card (albeit in virtual form) to every player in the 1980s and 1990s to have been woefully neglected.

Elster appeared in 26 games for the 1995 Phillies while I was spending the summer in North Carolina.  With the internet in its nascent stages, there was no way for me to follow along as the '95 squad played out its season.  Elster's tenure with the club was short and limited (for me at least) to seeing his name in an occasional box score throughout the summer.

As the back-up shortstop to Kevin Stocker, Elster hit just .208 (11 for 53) while driving in nine runs. It was absolutely stunning to me that Elster would be completely shut out of Phillies baseball cards given the number of different sets released in 1995 and 1996.  Upon leaving the Phils, Elster enjoyed the best year of his 13-year Major League career.  As the starting shortstop for the Rangers, Elster hit .252 with career highs in home runs (24) and RBIs (99).  He'd attempt one more comeback with the Dodgers in 2000 before calling it a career.

Agreed! Especially since I saw his name in Phillies box scores back in 1995, but had to wait almost 20 years to see actually proof that he wore a Phillies uniform. I was giddy when I found this photo.