One Sentence Summary:  Cameron Rupp's two-run home run off Madison Bumgarner in the seventh gave the Phillies an unexpected 3-2 win over the Giants.

What It Means:  Bumgarner hadn't allowed more than two runs in a start since April 15th.

What Happened:  With the Giants up 2-1 in the seventh, Tommy Joseph hit a lead-off double and scored on an Andres Blanco single.  Rupp then homered to center to give the Phillies the lead. Jeremy Hellickson turned in a solid start, allowing two runs (one earned) in six innings.  Edubray Ramos was impressive with a perfect seventh inning and Jeanmar Gomez notched his 20th save.

Island Report:  Another late night start meant that we were able to once again listen to this game in its entirety before and after dinner.  If I ever get the opportunity to plan another trip to Hawaii, I'll try to schedule it when the Phils are on the West Coast, just so I can enjoy an evening cocktail while listening to the games.

We spent this day swimming at the pool and in the ocean, with an occasional visit to Mickey Mouse. 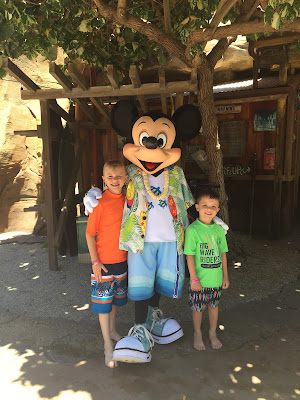 Be sure to check out the 2016 Season Summary page with game results and links to game summary posts.
Posted by Jim at 12:00 PM