One Sentence Summary:  Aaron Nola's struggles continued and a late comeback wasn't enough as the Giants walked off with an 8-7 win.

What It Means:  Nola was pulled after 3 1/3 innings making him the first Phillies starting pitcher to last fewer than four innings in four straight starts since Marty Bystrom in 1982.

What Happened:  Nola allowed five runs on ten hits in his shortened outing.  The Phils came back to tie up the game at 7-7, but back-to-back doubles from Ramiro Pena and Conor Gillaspie off Severino Gonzalez in the bottom of the ninth gave the win to the Giants.

Featured Card:  Bystrom was featured in the 1982 Donruss and Topps sets, but omitted from the Fleer set that year.

Island Report:  More quality pool/beach time for us on this Sunday.  I listened to the game in the morning while Jenna enjoyed her spa treatment and the boys spent some time playing at Aunty's Beach House. 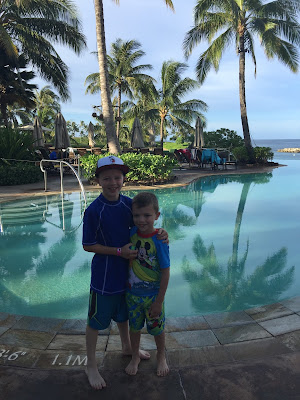 Transaction:  Following the game, starting pitcher Vince Velasquez was activated from the disabled list and reliever Elvis Araujo was optioned to the IronPigs.  Adam Morgan will move to the bullpen in what could be a temporary relocation.

Be sure to check out the 2016 Season Summary page with game results and links to game summary posts.
Posted by Jim at 1:30 PM

Email ThisBlogThis!Share to TwitterShare to FacebookShare to Pinterest
Labels: 1982, Bystrom