One Sentence Summary:  Peter Bourjos led the way with a two-run home run in the first and by scoring the winning run in the 10th as the Phillies completed the sweep with a 9-8 victory.

What It Means:  Bourjos hit .410 in June, tops in the National League for the month.  He entered the month with a .199 batting average and with his hot bat he ended the month at .262.  He's suddenly found himself as a potential trade chip for the Phillies come trade deadline time.

What Happened:  The Phils just kept battling in this game, scoring four times in the eighth after the Diamondbacks had scored three times in the seventh.  Bourjos had the big moments, but Cesar Hernandez had four hits while Cody Asche had three hits and drove in three runs.  Bourjos scored the eventual winning run on a Tyler Goeddel sacrifice fly.  Brett Oberholtzer recorded his first career save with a scoreless 10th.

Featured Card:  Bourjos hasn't appeared on any other Phillies cards this season other than his two cards in the team's two photo card sets.

Island Report:  We had a long but enjoyable day touring the entire island of Oahu and eventually making our way to the Polynesian Cultural Center on the North Shore.  The boys enjoyed the interactive lessons and activities.  We also attended the dinner show and luau followed by the Hā: Breath of Life evening show.  The latter was absolutely spectacular. 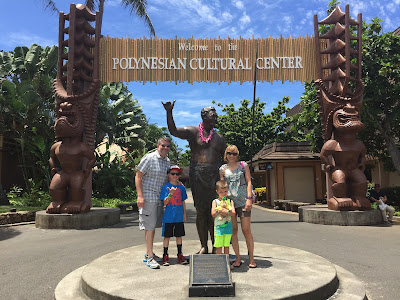 Be sure to check out the 2016 Season Summary page with game results and links to game summary posts.
Posted by Jim at 6:00 PM

Email ThisBlogThis!Share to TwitterShare to FacebookShare to Pinterest
Labels: 2016, Bourjos