One Sentence Summary:  Odubel Herrera was the hero of this game, with his first career lead-off home run, as the Phils held on to beat the defending World Champs, 4-3.

What It Means:  The win gave the Phillies a modest four-game winning streak.

What Happened:  Herrera homered in the first (9), scored on a Maikel Franco single in the third and had an RBI single in the sixth.  Cody Asche added an RBI double in the fifth.  Jeremy Hellickson pitched six strong innings to earn his sixth win and Jeanmar Gomez closed it out for his 22nd save.

Featured Card:  I'm always happy to feature a card for the colorful Herrera.  This is his logo-less Diamond Kings card from this year's Donruss set.

Island Report:  There was nothing but pool and beach time on our second to last day in Hawaii.  The photo below was my view as I listened to the game, which started at 1:05 Hawaiian Standard Time. You can't help but smile when this is your view and you're listening to Scott Franzke and Larry Andersen call a Phillies winning game. 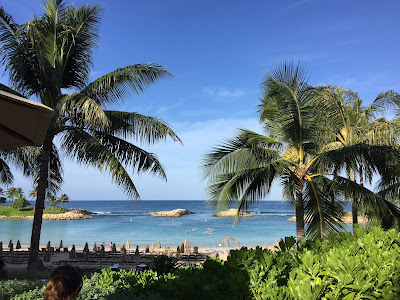 Be sure to check out the 2016 Season Summary page with game results and links to game summary posts.
Posted by Jim at 7:30 PM