One Sentence Summary:  Aaron Nola's struggles continued as the Phillies weren't able to overcome a five-run second inning from the Royals.

What It Means:  Following this game, manager Pete Mackanin decided that Nola's next start before the All-Star break would be skipped.  He'll remain in the rotation following the break, but I wouldn't be surprised to see the young pitcher back with the IronPigs in the second half if he continues to labor.

What Happened:  Nola ended his day by retiring the final 10 Royals batters he faced.  Before that, he had allowed five runs on six hits.

Featured Card:  I wish there had been more opportunities to feature some of Nola's 2016 baseball cards in the first half of the season.  Due to his struggles, he's only had four cards featured in game summary posts.  This is his 1979 Topps-inspired card from the recently released Topps Archives set and hopefully there will be many more Nola cards featured in these posts in the second half.

Island Report:  This was our last full day in Hawaii, and we once again spent the entire day either in or by the pool or at the beach.  The boys spent some more time at Aunty's Beach House, one of their favorite places at Aulani.  This was by far one of my favorite family vacations.  The weather and the island of Oahu were both gorgeous.  The food was amazing.  But most of all, I got to spend nine days with my family, laughing, making memories and enjoying each other's company.  I'll never forget this trip and I hope we get the chance to go back to Hawaii one day. 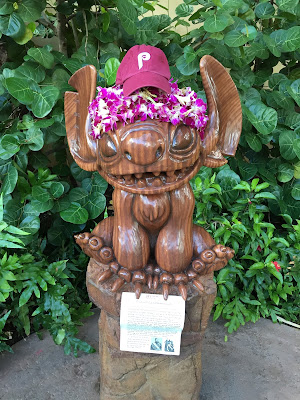 Be sure to check out the 2016 Season Summary page with game results and links to game summary posts.
Posted by Jim at 9:00 PM

Email ThisBlogThis!Share to TwitterShare to FacebookShare to Pinterest
Labels: 1979, 2016, Nola