One Sentence Summary:  Andres Blanco singled home the tying run and Ryan Howard walked with the bases loaded in the ninth inning to lead the Phils to a 4-3 win over the Diamondbacks.

What It Means:  This is the first series win for the team since May 16th through 18th, when they took two out of three from the Marlins.

What Happened:  The Phillies were down 3-2 when Jimmy Paredes doubled to lead off the ninth. Blanco brought him home, and then Brad Ziegler walked Odubel Herrera, Peter Bourjos and Howard. Maikel Franco added his 13th home run in the fifth.

Featured Card:  Here's Blanco's card from the team issued, second edition photo card set.  The back-up infielder was hitting a respectable .270 after his big hit, and the Phillies radio broadcasters mentioned during the game that he's been one of the best hitters this season for the team.

Island Report:  As luck would have it, Mickey and his friends were also vacationing in Hawaii the same week we were!  What are the chances?  Before spending the entire day at the pool, we were guests at Mickey's breakfast buffet at the Makahiki restaurant in Aulani. 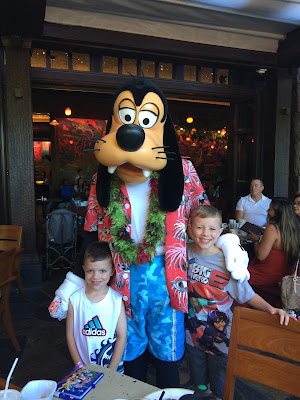 Be sure to check out the 2016 Season Summary page with game results and links to game summary posts.
Posted by Jim at 4:30 PM

Email ThisBlogThis!Share to TwitterShare to FacebookShare to Pinterest
Labels: 2016, Blanco