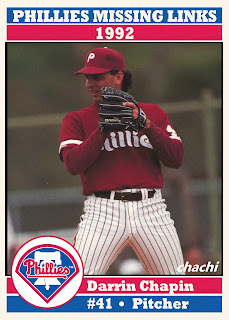 Chapin's Phillies career was limited to just one inning of relief on April 27th against the Padres.  He was recalled earlier that day to take Andy Ashby's spot in the rotation after Ashby suffered an injury. He wouldn't appear in another game before being sent back down to Scranton on May 6th to make room for Dale Murphy, who was activated from the disabled list.