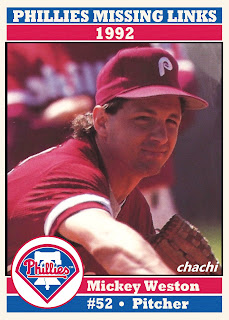 In need of a spot starter for their game on June 24, 1992, the Phillies recalled righty Mickey Weston from Triple-A Scranton/Wilkes-Barre.  Weston's services were needed since Brad Brink had struggled in his first two Major League starts (11 2/3 innings, 7 earned runs on 15 hits) and Terry Mulholland was out due to a broken finger courtesy of an Andre Dawson line drive.

Weston had pitched previously with the Orioles and Blue Jays, and the Phils signed him prior to the 1992 season.  His one and only start with the club didn't go well, as he allowed five runs on seven hits in 3 2/3 innings agains the Expos in a game the Phillies would ultimately lose, 8-1.  He was shipped back to Scranton following his start, never to pitch again for the Phillies.