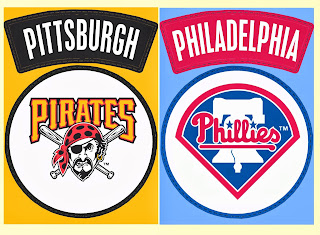 At the Ballpark:  It's a Hatfield Dollar Dog Night at the ballpark tonight and tomorrow night is the team's annual Asian Pacific Celebration.  On Wednesday, all fans will receive an MLB Network sling bag.

1973 Topps Flashback:  For the second flashback in a row, the two players featured were once traded for each other - straight up.  In October 1973, looking to upgrade at second base, the Phillies traded left-handed pitcher Ken Brett to the Pirates for Dave Cash.  Cash came up with Pittsburgh in 1969 and had played in parts of the past five seasons with the club.

He'd make an immediate impact on the Phillies, playing in all 162 games in both 1974 and 1975 and making the National League All-Star team three years in a row.  In 484 games with the Phils, Cash hit .296 and his positive attitude was a huge contributing factor to the team's pennant winning 1976 season.  Following the 1976 season, Cash left via free agency, signing with the Expos.

Brett (George's older brother) came to the Phillies in a massive seven-player deal with the Brewers in October 1972.  He pitched just one season for the Phils, going 13-9 with a 3.44 ERA in 31 games.  This 1973 Topps card was Brett's only major cardboard appearance as a member of the Phillies.
Posted by Jim at 6:05 PM