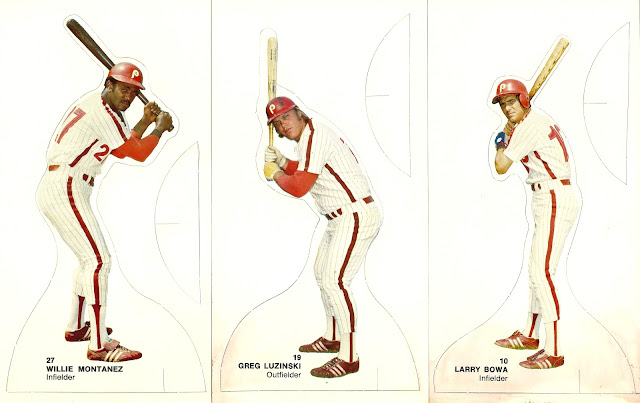 Reader Jim (also known as mrhaverkamp) saw my post from early November regarding the two new Johnny Pro Phillies cards I had added to my collection, and he realized the Dave Cash card looked familiar.  Turns out, he was the one who sold me the card via Checkoutmycards.com.  It's a small world after all.

Jim was kind enough to offer up five more cards that I needed for my Johnny Pro Phillies team set, and we quickly struck a very fair deal.  Despite an "unfortunate soda spillage" incident several years back that stained the bottoms of some of the cards, I'm thrilled to add these to my collection.

I'm down to needing just four more, including the highly sought after Mike Schmidt card, to complete my team set.

As a bonus, Jim threw in three 1970s Kellogg's cards, which I'm happy to add to my collection as well.  Along with the card featured here, I also received a 1970 Kellogg's Tim McCarver card (picturing him with the Cardinals) and a 1971 Kellogg's Tony Taylor card.