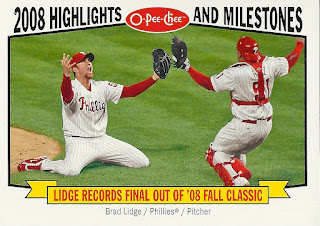 I read last night that Brad Lidge intended to announce his retirement from baseball.  He appeared in just 11 games with the Nationals in 2012, pitching 9 1/3 innings and compiling a 9.64 ERA.  He suffered a sports hernia injury in April that sidelined him for the remainder of the year.

Lidge of course authored one of the finest seasons ever for a Phillies relief pitcher in 2008, converting 41 of 41 save opportunities during the regular season and 7 of 7 save opportunities in the Postseason.  The image of him dropping to his knees and awaiting his catcher, Carlos Ruiz, following the final out of the 2008 World Series has been immortalized on several baseball cards and is burned into my brain.

If you're a Phillies fan, go ahead and take a few moments to think back to that final out and the euphoria that followed.  It's impossible to think of Lidge and his teammates joyfully converging on the mound in celebration and not smile.

Thank you, Lights Out and enjoy your retirement!
Posted by Jim at 8:00 AM

Time marches on. Just posted my Lidge Tribute as well