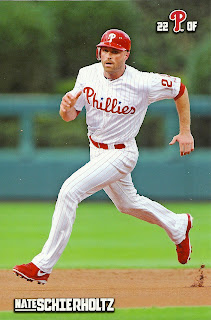 On Friday afternoon, the Phillies non-tendered Nate Schierholtz, making him a free agent and ending his short five-month stint with the team.  The move was made in an effort to shed Schierholtz's $1.3 million salary and seemingly to free up a potential roster spot for rookie Darin Ruf.

Email ThisBlogThis!Share to TwitterShare to FacebookShare to Pinterest
Labels: 2012, Schierholtz