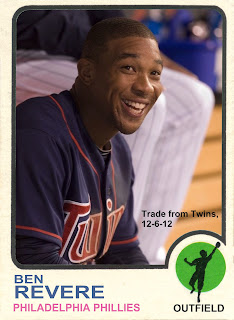 After watching B.J. Upton sign with the Braves, Angel Pagan re-sign with the Giants and Phillies Room favorite Shane Victorino head to Boston, the Phillies turned away from the free agent market and instead spun a trade to secure their new center fielder for 2013 and beyond.

I don't know much about Revere, but a quick check of his Baseball Reference page shows that he and I have the exact same number of career home runs.  He's 24, and he's under team control through the 2017 season.  The left-handed hitting Revere hit .294 last season in 124 games with the Twins while stealing 40 bases.  That number would have given him the team lead on the Phillies, and it's fitting that he's been compared to a young Juan Pierre, but with superior defensive skills.

Revere's first major baseball card appearance came within the 2007 Bowman Chrome Draft Picks set and he had several 2012 cards throughout the various Topps releases.  He'll most likely receive his share of Phillies cards in 2013, and there's a chance he may just be the first card in the upcoming 2013 Chachi set.  For now, he'll have to settle for this Chachi Transactions card.

On Victorino - A few nights ago, I received the following e-mail from Section 36:

Did we get a good one?

Yes, I believe you did.  Victorino is one of those guys that you love to have on your team, but it's easy to root against him if he's not on your team.  He's brings some swagger to the field and back when the Phillies were winning, it seemed as if Victorino was right in the middle of every big rally.  I was hoping the Phils would bring him back, especially after Pagan re-signed with the Giants.  My guess is that the team is saving its money to (hopefully) restock the bullpen or go after other needed pieces - third baseman, spare corner outfielder, improved bench.  Maybe Victorino's price tag and requested contract length scared them off.  In any event, it will be cool when Victorino returns to Citizens Bank Park in October for the long-awaited 1915 World Series rematch.
Posted by Jim at 8:00 AM

Glad you approve of Victorino. I can see what you mean about him being easy to root against though. He's been signed for like two days, and he's already tweeted 36 pictures of him in Red Sox gear, and declared NE Clam Chowder as his favorite soup.

You'll have to come up to Fenway this year to see him in his home whites again.