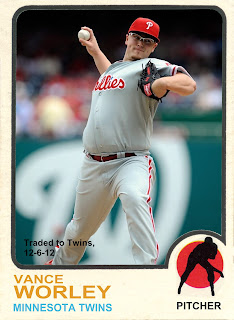 Like any middle of the road Phillies staring pitcher over the past decade or so, Vance Worley was either dazzling us with his dominance over the opposing team's batters or making us shout at the TV because of his painful laboring on the mound.  I'll miss his faux-hawk and the Oakley goggles, but overall I like the trade that brought the Phillies a consistent (hopefully) starting center fielder for the next five seasons in Ben Revere.

Worley received his first licensed Phillies card in the 2010 Bowman Draft set, both regular and Chrome versions, and his 2012 Bowman Chrome card could very well be his last with the team.  Hopefully this transaction happened early enough so that no Worley Phillies cards sneak into 2013 releases.

Trevor May was just recently added to the 40-man roster, but now he's heading to Minnesota with Worley.  At the start of the 2012 season, May was ranked as the second top pitching prospect in the Phillies organization.  He struggled at Double-A Reading this year, and I can only selfishly hope that he doesn't turn into the next Gio Gonzalez.

New Additions
Ender Inciarte (12/6/12) - Selected in the Rule 5 draft from the Arizona Diamondbacks
Ben Revere (12/6/12) - Acquired from the Minnesota Twins for Vance Worley and Trevor May
Posted by Jim at 8:00 AM