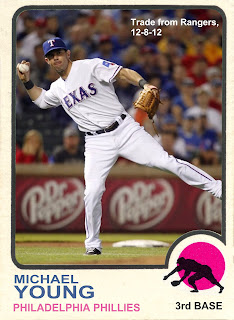 A few days after acquiring Ben Revere to man center field for the foreseeable future, the Phillies acquired a new third baseman, at least for the 2013 season.

The Phillies acquired third baseman Michael Young and cash from the Texas Rangers for relief pitcher Josh Lindblom and pitching prospect Lisalverto Bonilla.  The Rangers sent $10 million in cash along with Young, meaning the Phillies are on the hook for just $6 million of his total 2013 salary.  He'll be a free agent following the season.

The right-handed hitting Young came up with the Rangers for a brief, two-game cup of coffee in September 2000 and until yesterday, he never left.  The seven time All-Star is the Rangers all-time leader in games, at-bats, runs, hits, doubles and triples.  In 156 games last season, Young hit .277 with 8 home runs and 67 RBIs.

By all accounts, Young is a class act in the same vein as a Jim Thome or a Raul Ibanez.  I'm looking forward to seeing him in red pinstripes and I'm hoping he gets the Phillies a step closer to returning to the postseason.
Posted by Jim at 8:00 AM