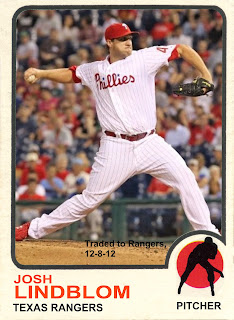 In the course of a few weeks, the Phillies discarded both Major League ready players acquired in July in the big Shane Victorino and Hunter Pence trades.  Nate Schierholtz, acquired for Pence from the Giants, was non-tendered over a week ago.  Although it's not official yet, it appears as if he'll sign with the Cubs.  On Saturday, Josh Lindblom, acquired for Victorino from the Dogers, was shipped to Texas in the Michael Young deal.  The Phillies netted four prospects in both trades (catcher Tommy Joseph, pitcher Seth Rosin, pitcher Ethan Martin and infielder Stefan Jerrin) and only time will tell if the Phils were winners in the deals.

Lindblom struggled during his short time with the Phillies.  In 23 1/3 innings, he surrendered 17 walks and accumulated a 1.543 WHIP.  For his troubles, he received two Phillies baseball cards.  His first appeared in the Phillies Team Issue 2.1 set and he also earned a card within the Topps Update set.

Lisalverto Bonilla was the Phillies selection for the 2012 All-Star Futures Game, although he didn't play having suffered a freak thumb injury in his hotel room the night before the game.  Bonilla has been in the organization since 2009 and he split last season between Clearwater and Double-A Reading, going 3-2 with a 1.55 ERA in 31 games.  His first name is listed as "Lisalberto" on the two minor league cards of his I have in my collection.