In the summer of 1987, I lovingly packed away my Star Wars and G.I. Joe men as I stood on the cusp of being a full-fledged, pimple-covered, annoying teenager.  I played video games on our Commodore 64, I played baseball (poorly), I collected baseball cards, and I started to think about girls a lot.  It was a big year for me, and a big year for Topps as they broke out the wood-grained borders for the first time since 1962.

The Set
Number of cards in the set:  It’s now six years in a row for the 792 base card and 132 traded card configuration.
My very brief thoughts on the set:  Love it.  I’m hoping it’s only a matter of time before Topps decides to put out another wood-grained-bordered base set. (Perhaps in 2013?)  The only minor quibble I had when the cards were first released was the lack of the player’s position on the front of the card.  Topps went with team logos on the fronts of the cards for only the second time since 1965 and they wouldn’t use team logos on their cards again until 1996.  The box containing the player’s name used the team’s actual colors, which was also a huge plus.
Notable competition:  Topps really set itself apart from the pack in 1987.   The Fleer and Donruss releases were re-hashes of their prior year sets and I remained unimpressed with Sportflics.

1987 Phillies
Record and finish:  The Phillies had a brutally disappointing season, finishing with a record of 80-82 and in fourth place behind the division winning Cardinals.
Key players:  Mike Schmidt had another great season (this would be his last great season), hitting .293 with 35 home runs and 113 RBIs.  He hit his 500th career home run on April 18th against the Pirates Don Robinson.  Juan Samuel was the offense's other bright spot, as the second baseman hit .272 with 28 home runs and 100 RBIs while stealing 35 bases.  Von Hayes (.277, 21 home runs, 84 RBIs) and Milt Thompson (.302, 46 stolen bases) also enjoyed solid seasons at the plate.  Shane Rawley led the pitching staff with 17 wins and Don Carman joined the rotation full-time, winning 13.  Closer Steve Bedrosian was awarded the National League Cy Young Award due to his stellar 40-save season in which he pitched to a 2.83 ERA in 65 games.  Kent Tekulve had another fine year out of the bullpen, appearing in a franchise record 90 games.
Key events:  The season had so much promise at the outset.  When the season started, the line-up boasted former All-Stars Lance Parrish and Mike Easler, both acquired during the off-season.  Both were busts.  Parrish hit .245 with 17 home runs and 67 RBIs in 130 games.  Easler hit OK (.282), but he was shipped back to the Yankees in June.  The big pitching acquisition was Joe Cowley, who was acquired from the White Sox in March for Gary Redus.  Cowley started 4 games, compiling a 0-4 record and a 15.43 ERA before injuries ended his season and ultimately his career.  The team's decline cost manager John Felske his job in June, and he was replaced by Lee Elia.

#94T Lance Parrish (c), #666 Von Hayes (1b), #255 Juan Samuel (2b), #294 Steve Jeltz (ss), #430 Mike Schmidt (3b), #53T Chris James (lf), #409 Milt Thompson (cf), #97 Glenn Wilson (rf)
Five of the eight starting position players had the photo appearing on their 1987 Topps card taken at a Spring Training game against the Expos.  When Schmidt came to bat, the photographer just pointed his camera and held down the button.
#771 Shane Rawley, #355 Don Carman, #499 Bruce Ruffin, #163 Kevin Gross
#63 Fred Toliver, #209 Rick Schu, #329 Ron Roenicke, #379 John Russell, #532 Jeff Stone, #553 Mike Maddux, #636 Darren Daulton, #684 Kent Tekulve, #702 Greg Gross, #719 Tom Hume, #736 Steve Bedrosian, #755 Luis Aguayo, #789 Dan Schatzeder, #16T Jeff Calhoun, #103T Wally Ritchie
#42 Gary Redus (White Sox), #191 Charles Hudson (Yankees), #471 Ronn Reynolds (Astros)
I was never a big fan of these cards, as I viewed these as taking spots in the set away from 26 additional players who could have had cards.  Instead of a card of Wilson, Samuel and Hayes standing around the batting cage chatting, we could have had a card of Todd Frohwirth.  We was robbed!
Who’s out:  There wasn't a lot of turn-over following the 1986 season, and Topps did a great job with the Phillies player selection.  Easler could have been a good candidate for the traded set, but by the time the set was released, he was already back in the Bronx.
Phillies on other teams:  Cowley (#27) and Easler (#135) appear with the White Sox and Yankees, respectively.  Both Calhoun and Parrish ended up with Phillies cards in the traded set, but they're in the base set with the Astros (#282) and the Tigers (#791), respectively.
What’s he doing here:  I don't have any problems with Topps' Phillies player selection in the set.  Imagine that.
Cards that never were candidates:  I'm not sure if Easler and Cowley "deserved" Phillies cards, but I'll list them here solely for the sake of completeness.  Keith Hughes made it into 37 games with the team, hitting .263.  He and reliever Michael Jackson (55 games, 3-10 record) would have to wait for the 1988 Topps set for their first Topps cards.
Favorite Phillies card:  Schu's card is great.  Gotta love a guy with a ripped knee-hole in his pants.

Other Stuff
Recycled:  Apparently, Topps is going to have an insert set with its 2012 release featuring the 1987 Topps design on mini cards.  I know I'm not alone in enjoying this recent resurgence of the mini cards.
Blogs/Websites:  There’s a 1987 Topps blog out there, but it’s been inactive since January 2010. The Godfather of Baseball Card Blogs, the aptly named The Baseball Card Blog, selected the 1987 Topps set as the best set of the 1980’s back in June 2006. 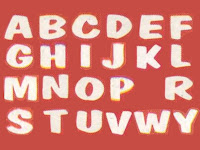 Did You Know?:  When I decided to create 1987 Topps cards for those Phillies missing from the base and traded series, the toughest part of the assignment was finding the right font to use for the players’ names.

White Sox Cards had done a really close approximation for his 1987 Topps creations using the Felt Marker font, so I tried that too.  But the names still looked a little off.  As this was in the era before I had two small boys, I decided to take the time to create a letter map, scanning and cropping each letter of the alphabet from actual 1987 Topps cards.  It was a painstakingly boring exercise, but in the end I was glad I had taken the extra step.  (Note there are a few letters missing.  Fortunately, I haven’t needed those letters yet!)  I’ll post my 1987 Topps Missing Links cards in a future post.
Posted by Jim at 7:00 AM

You're brilliant. Just thought I would let you know that. And I'm stealing that letter map in case I ever decide to make more '87 customs. I always just used Comic Sans...a very poor choice, I know.

So, when you look at that starting rotaion, and think about the current rotation, do you laugh or cry?

Thanks! The letter map works great unless you need a card for anyone with a Q, X or Z in their names.

S36 - It's funny, but I remember being really excited about the '87 season. I thought for sure that the Phillies were going to come out of nowhere and take the division, especially with Easler, Schmidt and Parrish in the line-up.

Like we've always said, it's suffering through seasons like 1987 that make our current fandom of the Phillies (and Sox) all the more enjoyable.

The Hit Man, Mike Easler, does have an OPC card announcing him as a Phillie:

It's another PINO (Phillies in name only) card, so completely understandable to not include it in the set. Oh, and also there's the fact that it's not Topps....

I believe this font is Dom Casual Bold.

Thanks! I'll have to check it out.