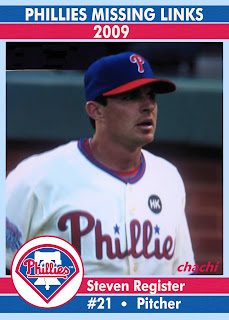 When Cliff Lee and Ben Francisco arrived in Philadelphia on July 29th in a blockbuster trade with the Indians, John Mayberry, Jr. and Steven Register were optioned back to the IronPigs to clear two roster spots.  Register had been recalled on July 25th, appearing in that night's game for a pair of innings, and his demotion four days later ended his big league career.

Register's promotion to the Phillies was necessitated by a rash of bullpen injuries in mid-2009 that saw Clay Condrey, Chad Durbin and J.C. Romero all on the disabled list.  His two-inning Phillies career came during an eventual 14-6 blowout win over the Cardinals with Register pitching the final two frames after relieving Chan Ho Park who in turn had relieved Rodrigo Lopez.  I'm fairly certain the photo used for this Missing Links card is a photo I took of my television screen from one of those innings as photos of Register in a Phillies uniform are fairly scarce.

Prior to his short Phillies career, Register pitched in the Rockies system and appeared with them for 10 games in 2008.

0 Register Baseball Cards in My Collection