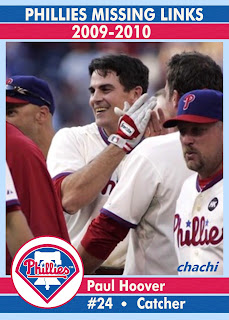 Paul Hoover is the rare player who appeared in parts of two different seasons with the Phillies, but still never appeared on a Phillies baseball card.  His first Phillies stint came as a September call-up in 2009, appearing in three games but with his only start coming on September 25th.  On October 4th, in the final game of the regular season, Hoover delivered a 10th inning RBI single to score John Mayberry, Jr. and deliver a 3-2 walk-off win for the Phillies.

He returned to the Phillies twice in 2010.  First, he was recalled on May 9th when back-up catcher Brian Schneider landed on the disabled list with a left Achilles strain.  Hoover appeared in six games, starting three games in a row in mid-May to spell the banged up Carlos Ruiz.  He returned to Lehigh Valley when Schneider was activated on May 24th, but he came back up in September for the second year in a row.