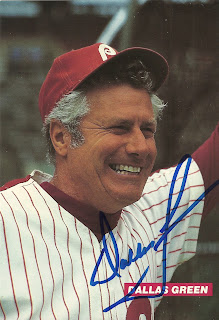 One Sentence Summary:  Dallas Keuchel and three Braves relievers held the Phillies to five hits in this 3-1 loss.

What It Means:  In his post-game interview, Keuchel indicated the Phillies had never even come calling when the then free agent was looking for employment before the Braves signed him in early June.  Instead, the Phillies have relied on a steady stream of starting pitchers who can't seem to get past the fourth inning or have ERAs over 5.  In 16 starts with the Braves, Keuchel is 8-5 with a 3.35 ERA and 81 strikeouts in 96 2/3 innings pitched.

What Happened:  All three runs for the Braves were unearned and scored in the fourth inning after a costly Jean Segura error.  The five Phillies hits were all singles and they went 0 for 6 with runners in scoring position.

Featured Card:  Here's a card of a Dallas who did play for the Phillies - Dallas Green - as well as lead the team to their first World Championship title in 1980.  After a multi-year eBay search, I recently added this card to my collection, signed by Green at the 1990 ALS Phestival as part of the 10th anniversary celebration of that 1980 Phillies team.
Posted by Jim at 8:00 AM