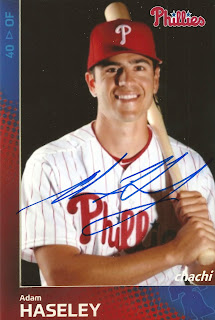 One Sentence Summary:  Paced by four home runs, the offense came to life in this 9-5 win.

What It Means:  The Phillies are still somehow hanging around the Wild Card race and after a rare Friday off day, they'll open a quick two game series at home on Saturday night against the Red Sox.

What Happened:  Cesar Hernandez (11), Adam Haseley (5), Jean Segura (12) and J.T. Realmuto (25) all homered.  Hernandez added an RBI single in the sixth and Sean Rodriguez cushioned the lead with an RBI double in the eighth.  The hodge podge bullpen did its job again once starter Drew Smyly departed after four innings.  Jared Hughes pitched 1 2/3 scoreless innings and picked up the win while Hector Neris recorded the final four outs for his 26th save.

Featured Card:  It was Haseley's home run in the second that put the Phillies ahead for good, and he also made another impressive catch in center field.  Since the Phillies didn't create a photo card for Haseley this year, I took matters into my own hands and created the card shown here.  Fellow collector Rick was then gracious enough to have it signed for me (along with one for himself) and I'm very happy to have this autographed card of the young Phillies outfield in my collection.

Field Report:  Doug and I attended this game and we were thrilled to be able to go down on the field for a pregame ceremony to recognize the sponsors at this year's ALS Phestival.  This is the third year in a row we've been able to do this, and I hope the streak continues for many more years.  The highlight for Doug was fist-bumping Neris as we were leaving the field, and he also got a few "what's up buddy" from Edgar Garcia, coach Dusty Wathan and Brad Miller.
Posted by Jim at 12:00 PM