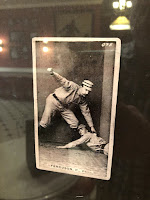 One Sentence Summary:  The bullpen duo of Juan Nicasio and Adam Morgan allowed six runs in the seventh inning, as the Marlins stunned the Phillies with a 9-6 win.

What It Means:  The Phillies remain unable to solve the Marlins, losing their fifth in a row to the team after an impressive four-game sweep of the Mets.  They had been up 6-1 as late as the sixth inning before the Marlins began their comeback.

What Happened:  Zach Eflin was effective in his start, giving up three runs over six innings of work.  But Nicasio and Morgan couldn't keep the Marlins off the basepaths.  Scott Kingery contributed a two-run single in the fourth and Rhys Hoskins hit a two-run home run (19) in the fifth. 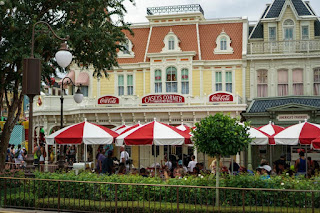 Featured Card:  On the wall of Casey's Corner, a quick service hot dog restaurant on the northwest corner of Main Street U.S.A. in the Magic Kingdom, there's a frame on the wall containing what appear to be vintage baseball cards.  I took a few pictures as we were heading to our breakfast at The Crystal Palace, making a note to research the cards further when I returned home.

After some searching, and a review of the fantastic book, Classic Baseball Cards, The Golden Years 1886-1956, I came up empty with an exact match for the cards.  They appear to be reproductions (?) of photos used for the Old Judge set issued between 1887 and 1890, featuring Jack Clements, Jim Fogarty and Charlie Ferguson from the Phillies, Billy Nash from the Boston Beaneaters, Duke Farrell from the Washington Senators and Charlie Duffe from the St. Louis Browns.  The three Phillies were teammates between 1884 and 1887, and Nash played for the club from 1896 to 1898.

It would make sense that Disney would crop out any cigarette advertisement from something hung prominently in one of its restaurants, but hopefully these are reproductions and no actual vintage cards were harmed in the production of this display. 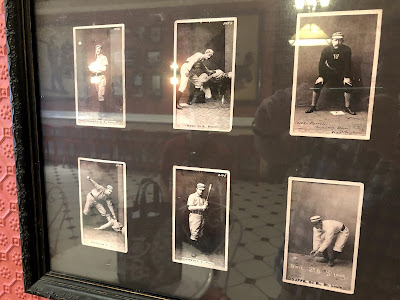