One Sentence Summary:  Vince Velasquez was knocked around in his start and the offense provided only four hits in this 6-2 loss to the Marlins.

What It Means:  Maybe it's not the lucky bamboo, and the Mets are just a bad team.

What Happened:  Ironically enough, Velasquez provided all the offense for the Phillies, hitting a two-run home run in the fifth.  On the mound, he allowed four runs on six hits over just 4 1/3 innings.

Featured Card:  I thought this was cool.  Mike Drago Tweeted the below photo of the last four top draft picks for the Phillies who were all in the line-up for the Reading Fightin Phils on Thursday night.  Cornelius Randolph (2015), Mickey Moniak (2016), the recently promoted Alec Bohm (2018) and Adam Haseley (2017) on a rehab assignment.

Bohm, the team's future third baseman, homered in his first game with Reading, joining Mike Schmidt and Scott Rolen who also homered in their first games with the Double-A squad.  Bohm will represent the Phillies at this year's Futures Game in Cleveland. 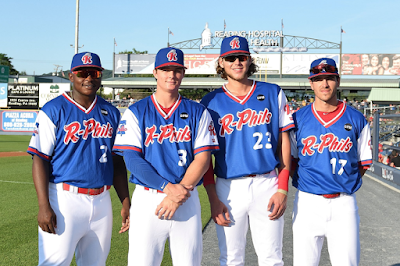 Transactions:  Reliever Tommy Hunter was activated from the 60-day IL and Fernando Salas was designated for assignment to free up a spot for Hunter on the 40-man roster.  Salas pitched 1 inning in his short tenure with the Phillies, giving up 3 hits and a home run.  He seems destined for a future Chachi Missing Links card.  Haseley was also activated from the IL and optioned to Lehigh Valley.
Posted by Jim at 4:00 PM