One Sentence Summary:  The Phillies won in dramatic fashion, using ninth inning home runs from Maikel Franco and Jean Segura to stun the Mets in this 6-3 victory.

What It Means:  The last time the Phillies completed a four-game sweep, all via comeback wins was 1955.  (Per John Clark Tweet.)  And per a Ryan Spaeder Tweet, the most recent Phillies teammates to hit a game-tying home run and a walk-off home run in the 9th inning of a game were:

What Happened:  Aaron Nola pitched brilliantly, allowing one hit and striking out 10 over seven shutout innings.  With a 1-0 lead, courtesy of Bryce Harper's home run (14) in the sixth, Hector Neris blew his save chance by allowing three Mets runs in the ninth.  With Mets closer Edwin Diaz on the mound, Franco hit a two-run game tying home run and Segura hit his blast after Sean Rodriguez had walked and Scott Kingery had singled.

Field Report:  As this game was happening, we were enjoying a day at the Happiest Place on Earth with a few thousand of our closest friends.  Can you spot The Phillies Room support staff in this picture? 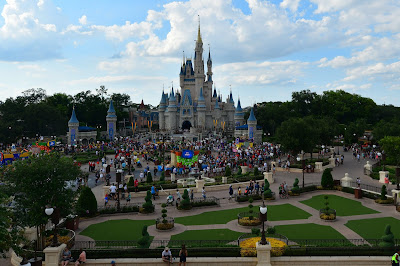 Near the lower left, boy walking from right to left wearing a blue shirt and a red cap, with a mom behind him?

Nice 1971 Highlights card of a memorable moment! Also, thanks for linking to that 2013 card. I remember that game well. It was the week after Mother's Day and we were visiting my parents for the day (after spending the week earlier with my mother-in-law). We were eating an early dinner and had the TV on quietly in the living room. I could see it from my seat, and after I saw the Phils tie it, my dad said "Turn up the TV" and so we all got to see and hear Galvis win it. A great family memory!

Follow the sidewalk from the bottom right towards the castle . . . and there we are!

I like the way this highlight card turned out. There were no highlight/record breaker cards within the actual 1971 Topps set, so I took a Greatest Moment card and collapsed the dimensions so that the design would fit onto a 2 1/2 x 3/12 card.