One Sentence Summary:  Bryce Harper led the Phillies' 17 hit effort, going 3 for 4 with a two-run home run in this 13-6 win.

What It Means:  The win salvaged the series with the Marlins, avoiding a sweep.

What Happened:  Harper, Jean Segura and Cesar Hernandez all had three-hit games.  Brad Miller had a pair of RBIs, including a solo home run (3) in the fourth.  Jake Arrieta also added a two-run single in the sixth.  Arrieta got the win, allowing four runs on eight hits in his six innings of work.

Following the game, J.T. Realmuto was named as the Phillies sole representative for this year's All-Star Game, to be held in Cleveland on Tuesday night.

Featured Card:  Harper gets the card for his big day, which included a season high four RBIs.  The Phillies slugger was excluded from the All-Star roster for the first time since 2014.

Field Report:  On this day, we were busy meeting with the unofficial Captain of the Disney Fantasy before embarking on our six night Mexican cruise.  The internet service was spotty (and expensive) and I wasn't particularly sorry to miss this week of games.  It was odd waking up the next morning and having no idea how the Phillies had fared the night before. 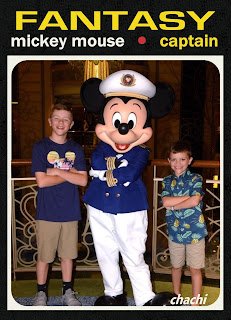