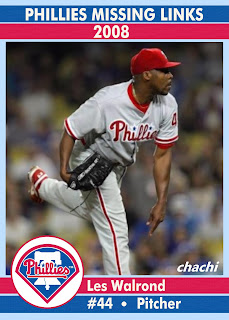 Les Walrond had already been playing professional baseball for 10 seasons, including very brief parts of two seasons with the Royals and Cubs, when the Phillies purchased his contract from the Lehigh Valley Iron Pigs on August 2nd.  Reliever Rudy Seanez had landed on the disabled list and the Phillies went with the lefty Walrond to fill his spot.  He got knocked around a little in four appearances and was sent back down when Seanez returned.  Walrond was then one a slew of September call-ups for the club but he'd appear in just two more games that season.

Walrond was a 13th round draft pick of the Cardinals and his 15 year odyssey saw him spend time with the Cardinals, Royals, Marlins and Cubs before his six games with the Phillies.  He pitched for two seasons in Japan and Korea in 2009 and 2010 before coming back to the Phillies organization and appearing in 33 games for the Reading Phillies and IronPigs in 2011.

Phillies Career
6 games, 10 1/3 innings, 1-1, 6.10 ERA, 13 hits, 9 walks, 12 strikeouts
Acquired:  May 3, 2008 - Signed as a minor league free agent formerly with the Chicago Cubs organization.
Debut:  August 5, 2008 - Relieved Clay Condrey in the 7th inning of a game against the Marlins.  Faced 5 batters, recording a strikeout and then allowing a walk, a wild pitch, another walk and a single to Alfredo Amezaga before he was pulled in favor of Ryan Madson.
Final Game:  September 28, 2008 - Was the winning pitcher the day after the Phillies had clinched the division, relieving Kyle Kendrick in the 5th and pitching 2 scoreless innings.
Departed:  November 4, 2008 - Selected off waivers by the Toronto Blue Jays.

All signatures in black sharpie.

LOL- Ramon and Roly get the sweet spot!

And seeing as how Brad Harman is Australian, he might be a tough get.

I'm thinking Ramon signed it but only took up half the sweet spot so, like in the regular season, Roly stepped in and finished it off for him!

BTW, on my own 2008 ball (in progress for 9+ years), I asked Charlie Manuel to sign the sweet spot and add "2008 WS Champions"--he did, but to my chagrin he didn't do it under his name but instead used much of the side panel to do it. So if I ever get the ball more or less complete, it's going to have a lot of players squeezing in their names around Charlie's writing. Arghhh! Well, at least it will be a unique one...