Another Post-Vacation Catch-Up, Part 1 of 7

One Sentence Summary:  Four home runs backed another impressive outing from Zach Eflin as the Phils downed the Fish, 8-3.

What It Means:  The win extended the Phillies' lead in the division to a game and a half over the Braves. 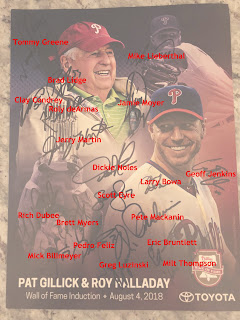 Featured Cards/Field Report:  We were fortunate enough to be able to take two separate vacations this summer and before leaving for vacation #2, Doug and I decided to attend the Phillies Wall of Fame ceremony for the late Roy Halladay and former General Manager Pat Gillick.  We really wanted to witness the ceremony (which was fantastic, as expected) but Doug also wanted to try to get some alumni autographs in the Hall of Fame Club.

It seemed much more crowded than last year (see link below) and Doug wasn't able to wiggle his way to the front of the roped off area outside the suite where the alumni were gathering . . . or so we thought they were gathering.  He just missed getting a Pat Gillick signature and managed autographs from Dickie Noles and Pete Mackanin before frustration and some boredom set in.

That's when I noticed that the players were leaving the suite by another door, mostly unnoticed, and heading down to a different suite.  With most autograph hunters positioned by the first door, the casual fans walking through the Hall of Fame Club didn't notice the alumni leaving by the second door.  But I did.

We stationed ourselves there and Doug was able to top his record from last year by gathering 20 autographs.  Players such as Clay Condrey, Scott Eyre, Pedro Feliz and Eric Bruntlett stood casually in the open while Doug asked them politely for an autograph.  Once other fans saw someone signing something, a slightly bigger crowd gathered.  Some of the returning players and coaches were happy to sign for Doug as long as he walked quickly with them to the second suite down the hall.  Brett Myers, Geoff Jenkins and Jamie Moyer were too quick for me to get pictures, but I managed to get a photo of Moyer from the back, featuring his glorious ponytail.

When the evening was through, Doug had collected autographs from most of the returning alumni, and I've included a legend above of his signed Wall of Fame print for our future reference.  (We're in the process of getting this framed.)  Some of the players/coaches lingered around long enough that he was able to get a second autograph to be included in my collection.  Eyre, Feliz, Rich Dubee and Milt Thompson signed photo cards for Doug along with his Wall of Fame print.  The prize of his collection was Pat Burrell.  Burrell personalized his Wall of Fame print from 2015 and he actually chatted a little with Doug before disappearing.  I don't know if Burrell signed for anyone else.

It was another memorable night, and we'll be back for more next year!  Of course I needed to make a very limited edition insert set to mark the occasion, and those cards are featured here.

That's quite a haul!

Excellent night in the Hall of Fame Club--good memories for Doug!

Lidge looks like he is about a further 3 degree angle from pouring out his beer, by the way....

Jerry Martin adroitly held his cup with his teeth while he signed and didn't lose a drop!

Jerry Martin is a true pro!