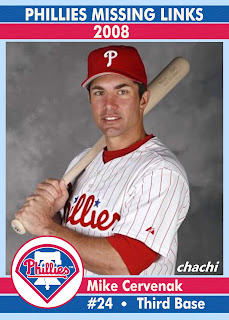 In December 2007, the Phillies signed Mike Cervenak to a minor league deal and invited him to spring training.  Playing for the Orioles' Triple-A team in Norfolk in 2006, Cervenak had led the International League in hits (157), at-bats (554) and games (140).  An All-Star with the Lehigh Valley IronPigs, he got his first brief taste of big league action when the Phillies recalled him on July 10th, but he'd earn just one pinch-hitting appearance before being sent back down on July 20th.  A little over a week later, Pedro Feliz landed on the disabled list with a bad back and Cervenak got the call again.

He was used sparingly in August and even less in September once rosters expanded, and his sole start came the day after the Phillies had clinched the N.L. East.  He spent the entire 2009 season back in Lehigh Valley, and another call-up to the Phillies eluded him despite a .305 average.  Cut loose by the Phillies following the 2009 season, Cervenak played professionally for three more years. 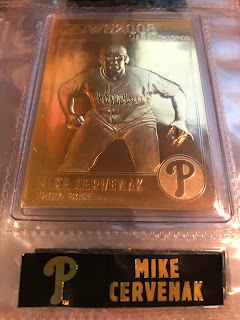 I'm not counting it for purposes of this exercise, but I do actually have a Cervenak Phillies "card" in my collection.  Following the team's World Series win in 2008, the hobby market was flooded with Phillies collectibles and merchandise and the Danbury Mint got in on the act.  My Dad subscribed me in the Danbury Mint's 2008 World Series Champions 22kt gold baseball card series, featuring the players and coaches from the team.

Needing to fill a 38-card checklist, there were some questionable additions to the set, including Cervenak.  The cards aren't that attractive, and the card backs are almost impossible to read, but it's a cool oddball item in my Phillies collection, made all the more meaningful since it came from my Dad.

I bought about 15 of those Danbury Mint cards in 2014 or so on eBay. I paid between maybe $4 and $10 each, which was below the selling price in 2008 (I think maybe $15 each, or was it 2 for $15?). I had figured I would never complete the set, but then someone offered the entire (35 card?) set for maybe $100 and I snapped that up. I am tempted to try to get the extras signed, at least for guys like Cervenak, although I'm not sure how a sharpie would look on them. Still, they are the right size and are technically baseball cards, so they would have a place in my signed Phillies card collection....

It's a cool collectible and my set came with a an album and pages for all the "cards". I remember thinking, "Wait, they're making gold cards for everyone?"