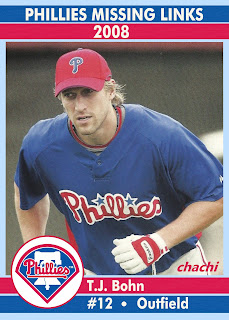 In the years since the Phillies won the 2008 World Series, I've honestly occasionally wondered, "Did T.J. Bohn receive a World Series ring?"

Bohn was claimed off waivers from the Braves on September 24, 2007 and came to spring training in 2008 as a member of the team's 40-man roster.  Chris Snelling was the first outfielder to join the club when Shane Victorino landed on the disabled list on April 12th, but when Snelling himself got hurt a week later Bohn got the call.  Bohn was sent down once Victorino was healthy, but got another shot when Jayson Werth landed on the disabled list on May 24th.  When Snelling was activated on June 2nd, Bohn was sent back to the Lehigh Valley IronPigs, never to return.

Manager Charlie Manuel used Bohn very sparingly in the limited time he was on the roster, only entering 14 games as pinch-hitter, pinch-runner or late inning defensive replacement.  He never entered a game before the 6th inning, tallying 5 total at-bats and collecting 2 hits.

Bohn was let go following the 2008 season and was out of baseball for all of 2009.  He played the 2010 and 2011 seasons with the Sioux City Explorers of the independent American Association before calling it a career.  But did he receive a World Series ring?

Speaking of "getting a ring," it's 10 years later, so my memory could be off, but I believe Adam Eaton rode on a car around CBP for the in-stadium ceremony on October 31--the one where Chase uttered his famous, should-have-been-bleeped-out line. And my recollection is that he was actually booed when his name was announced. I think I heard someone yell "Give back the ring, Adam." Given that he had a 5.80 ERA that year with a 1.636 WHIP and a 4-8 record (following up on 6.29, 1.627 and 10-10 the year before for the Phils), it seemed a fitting reaction from the crowd....

Eaton was definitely there in 2009 for the pre-game ring ceremony as I believe he, Geoff Jenkins and Pat Burrell all showed up wearing street clothes. Burrell was with the Rays at that point and somehow he was able to come to town for the ceremony.

I was there, and it was kind of a little funny that Eaton would show up.

This piece from the Sioux City Journal, where Bohn wrapped his playing career, says that he did indeed get a 2008 ring:
",,,the athletic outfielder with a World Series ring from the 2008 Philadelphia Phillies."
LINK: https://siouxcityjournal.com/sports/baseball/professional/minor/explorers/uncertain-winter-leads-bohn-back-to-sioux-city/article_48258338-652e-5e98-a701-597f05864e53.html

Thank you for posting this . . . I had always assumed/hoped he received a ring so it's nice to know he actually did.