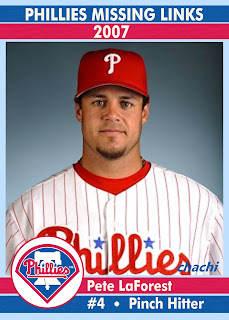 With active rosters expanded to 40 players and the Phillies in an unexpected pennant race, the team claimed Pete LaForest off waivers from the Padres on September 4th.  A catcher by trade, each of LaForest's 14 games with the Phillies came as a left-handed pinch-hitter.  He went just 1 for 11 (.091) in that role with his only hit coming in his very first at-bat with the club - an RBI single to score Greg Dobbs, while pinch-hitting for reliever Kane Davis.  LaForest was invited back to spring training with the Phillies in 2008, but the team opted to go with Carlos Ruiz and Chris Coste behind the plate at the big league level and Jason Jaramillo at Triple-A.  He was released and spent the next five seasons playing in Mexico and for independent league teams.

In 2003 and 2005, LaForest appeared in 19 and 25 games respectively for the Devil Rays.  He started seven games at catcher for the Padres in 2007 before being claimed by the Phillies.

Phillies Career
14 games, 1 for 11 (.091) with 1 RBI, 2 walks, 2 runs scored, 4 strikeouts
Acquired:  September 4, 2007 - Selected off waivers from the San Diego Padres.
Debut:  September 5, 2007 - Pinch hit for Kane Davis, collecting a single off the Braves' Oscar Villarreal that scored Greg Dobbs.  LaForest would come around to score on a Chase Utley single.
Final Game:  September 27, 2007 - Pinch hit for Kyle Kendrick in the 6th inning against the Braves, grounding into a double play.
Departed:  April 18, 2008 - Released.