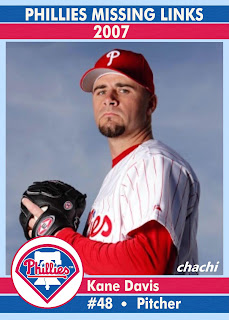 On August 31, 2007, the Phillies found themselves just two games behind the Mets in the division and they needed a fresh arm for the bullpen.  Geoff Geary was sent down to the Triple-A Ottawa Lynx and Kane Davis took his place in the bullpen.  Since the 2000 season, Davis had pitched in parts of four seasons with the Indians, Brewers, Rockies and Mets, hitting a career high with 57 appearances for the 2001 Rockies.  With the Lynx, Davis had been a reliable reliever, making 41 appearances and tallying an impressive 3.06 ERA in 53 innings pitched.

He appeared in 11 games down the stretch for the Phillies, allowing runs in 4 of those 11 appearances pitching mostly in middle relief.  Left off the postseason roster, Davis was one of the first members of the 2007 club to depart, being granted free agency on October 19th.  He spend the next few seasons in the Blue Jays' minor league system, pitching in Korea and making a few stops in the independent Atlantic League.

Phillies Career
11 games, all in relief, 0-1, 5.56 ERA over 11 1/3 innings, 17 hits, 8 walks, 10 strikeouts
Acquired:  December 4, 2006 - Signed as a minor league free agent formerly with the Somerset Patriots of the independent Atlantic League.
Debut:  August 31, 2007 - Relieved Kyle Kendrick and pitched the final two innings in a 9-2 win over the Marlins in Miami.  Struck out Dan Uggla to end the 8th.
Final Game:  Setpember 23, 2007 - Started the 8th inning with the Nationals holding a 3-2 lead and allowed 2 more runs to score before being relieved by Clay Condrey.  Final batter faced was Wily Mo Pena, who singled to center.
Departed:  October 19, 2007 - Granted free agency and signed with the Toronto Blue Jays organization, December 26, 2007.